I've been recently reading about the Minnesota dentist who went to Africa on Safari and the killing of Cecil the Lion.  The hue and cry over this has been just short of amazing in my opinion.  I have yet to weight in on the subject very heavily, mainly because what I say will little matter in the grand scheme of things.  I've found, many times over, that once people set their opinion about something, there are two chances that you will have to sway them to change their opinion - Slim and None.

Now, my opinion is this.  I was dismayed that the man chose to kill a magnificent beast such as Cecil the Lion.  I do not condemn hunters.  In the past, I've eaten elk and goose that were hunted.  Therein lies the difference in the two.  If a person is hunting and will eat the meat, then I'm all for it as long as the hunting is done humanely.  To hunt, just for a trophy, I feel is despicable.  We already know that we are superior to animals due to our superior intellect, but to take a life of another animal, just so you can mount their head on the wall I feel is just wrong.  That being said, I do feel that keeping the head of an elk, or deer as a trophy is fine, if you're also going to eat the animal. 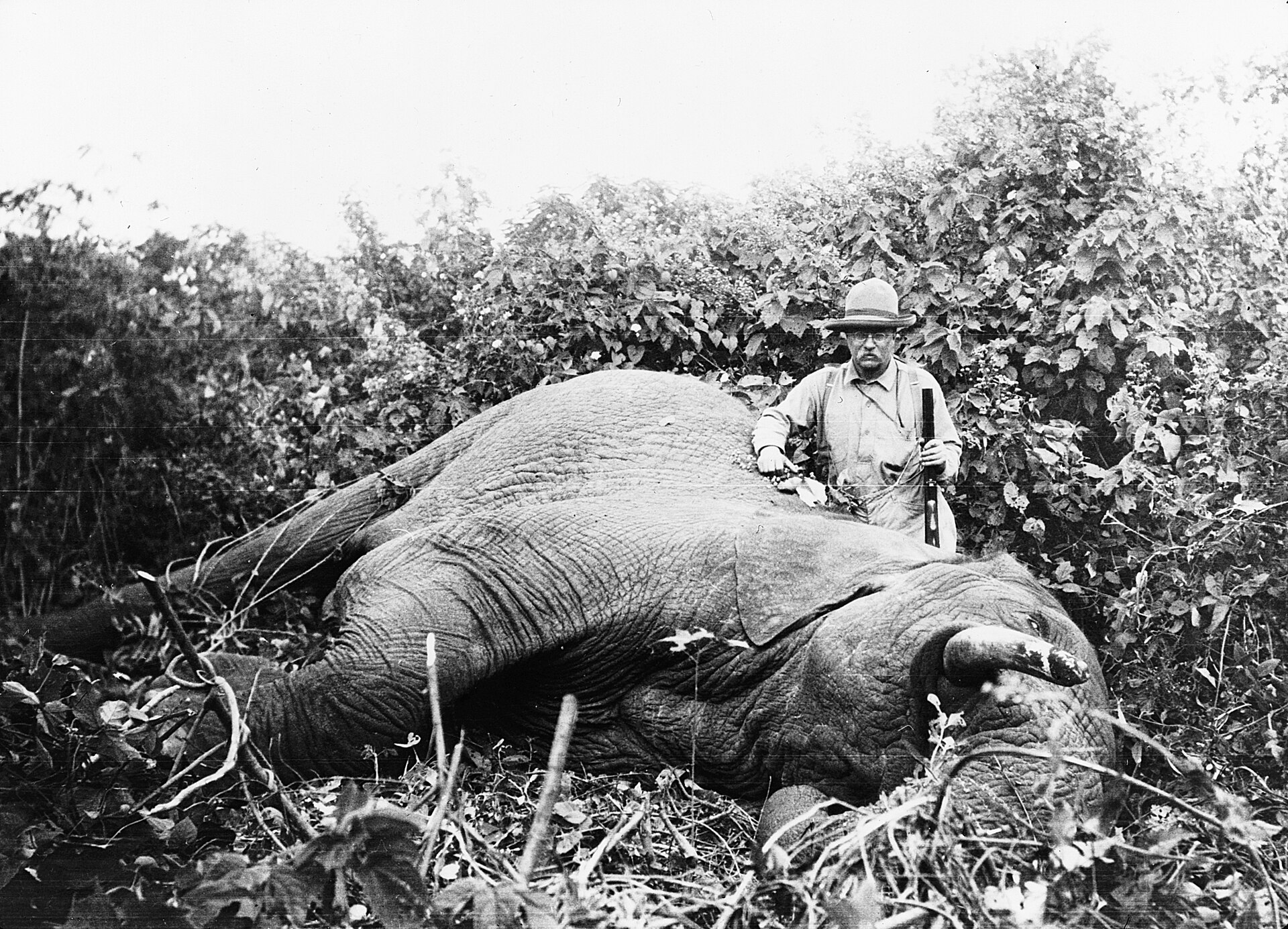 Now the uproar over this incident is really interesting. Take a look at the photo I've added to this  entry.  The photo is not mine and is in the public domain.  One of our most beloved presidents, one who is on Mt. Rushmore, was an avid hunter.  Theodore Roosevelt went on an extensive African safari following the end of his presidency.  Roosevelt spent about a year in Africa, collecting specimens for the Smithsonian and other museums.  Collecting specimens basically means shot and killed.  Roosevelt, in a year's time, was responsible for the death of over 1100 animals, including over 500 big game animals.  17 lions, 11 elephants and 20 rhinoceros were among the harvest, including 4 white rhinos.  Today, there are only 4 Northern white rhinos in existence anywhere in the world.

I find it rather contradictory that Roosevelt, who preserved many of our national monuments, including the first national monument, Devils Tower, and helped start the conservation movement in our country, could go on this kind of hunting expedition.  Yet, one could argue that his collecting of all these animals might result in better knowledge of the animal because now those specimens are displayed in museums in many different places.  Roosevelt was quoted as saying, "I can be condemned only if the existence of the National Museum, the American Museum of Natural History, and all similar zoological institutions are to be condemned."

Had Roosevelt gone on his safari in today's Internet climate, he would have been vilified.  I doubt that many people out there know about this chapter of his life. I don't like this aspect of one of my hero's life, but there's not a whole lot I can do about it, because it's in the past.  This is part of his life that balances out some of the good he did during his life.  All people are like that.

I used to revere Thomas Edison when I was younger.  The more I know about Edison, the more I've come to know that Edison wasn't a very nice person.  But that's beside the point.  Are we going to condemn a man for one incident?  Even if it's a series of incidents, are we going to condemn this man for all eternity?  If that's the case, where's the condemnation of Theodore Roosevelt?

In reality, the uproar over this incident has buried something else.  Social media has excoriated this dentist and in the process has basically forced him to shut his place of business.  Perhaps he can afford to do that, seeing how he could afford $55,000 to bag a lion trophy in Africa.  I would be willing to bet that all of his employees, however, can't afford this time off.  Where's the uproar over that?  And don't try to justify it by saying that they worked for a guy who kills for sport.  Do you know what your employer does in his or her off time?  Probably not.  Think about that for awhile, especially the next time another firestorm runs rampant via social media.
Posted by Paul Myers at 5:17 PM

Paul Myers
Up until May, 2019, I taught the hormonally schizophrenic, otherwise known as junior high kids. After 36 years in education, I felt it was my time to step down and retire from teaching. I'm now working on improving my photography once again, as well as thinking about traveling a little bit more than I have in the past.